From prep cook to executive chef, and front desk to resort management, the hospitality and culinary industries offer a world of career possibilities.

Our students learn in the classroom, kitchen, dining room and a fully functioning on-campus eatery (Café Anders in Albany and the Terrace Room in Schoharie). Students intern at local restaurants, hotels and other businesses, as well as through public service events and culinary and hospitality skills competitions. They also compete for college scholarships.

Watch A Video About Our Culinary Arts and Hospitality Program 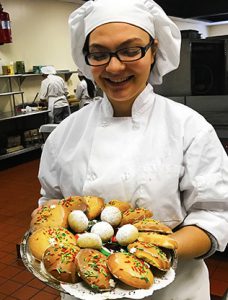 The culinary and hospitality industry offer a world of career possibilities.

Education Requirements: Most chefs and head cooks learn their skills through work experience. Others receive training at a community college, technical school, culinary arts school, or a 4-year college. A small number learn through apprenticeship programs or in the armed forces.

Who is eligible to attend?

Typically juniors and seniors from our 24 component school districts who are interested in career training as part of their high school experience are eligible to enroll.

How do I enroll?

The first step is to meet with your home school guidance counselor to learn how Career & Technical Education can benefit your career path. Your counselor can then help you arrange a tour of our Albany (Colonie) or Schoharie campuses, or the Center for Advanced Technology at Mohonasen. They can also help you begin the enrollment process.

Where can I learn more?

Send an email indicating your interest to diane.ogren@neric.org or call 518-862-4816. Read more about our school.

Paul Dolan has nearly 20 years in the culinary and hospitality industry, including owning two seasonal restaurants in Southern Vermont. He was executive chef for Sodexho Marriot at the Beverwyck and at The Four Chimneys, executive sous chef at the Tavern at Sterrup Square, chef for Scrimshaw at The Desmond and held various cooking and apprenticeships at area restaurants and clubs. He is currently the banquet chef at The Stateroom in Albany and has an upcoming catering business called Charcoal Dole. He is a certified executive chef and certified culinary educator from American Culinary Federation and a graduate of Culinary Institute of America.

Erica Weakley is a 2007 graduate of the Capital Region BOCES Career and Technical School Culinary Program who went on to graduate from the prestigious Culinary Institute of America. She is an adjunct professor at SUNY SCCC who has also worked as a bakery manager, pastry chef and wedding cake decorator. She currently works per-diem Mazzone Hospitality in addition to her teaching duties at Capital Region BOCES and SUNY SCCC.

Paul Rother has 30 years of experience in the food service industry. A two-time culinary Gold medal winner, he a graduate of SUNY Cobleskill’s Professional Chef program. He has worked in many different establishments throughout the region, the Catskills, New Orleans and Utah.  Rother was named “Chef of the Year” in 2000 and “Chef Educator of the Year” by the American Culinary Federation. Rother previously taught culinary at the Glenmont Job Corps facility and currently runs a BBQ catering company in the summer and also owns an in-home catering/cooking lesson service – 3 Steps Chef, LLC.